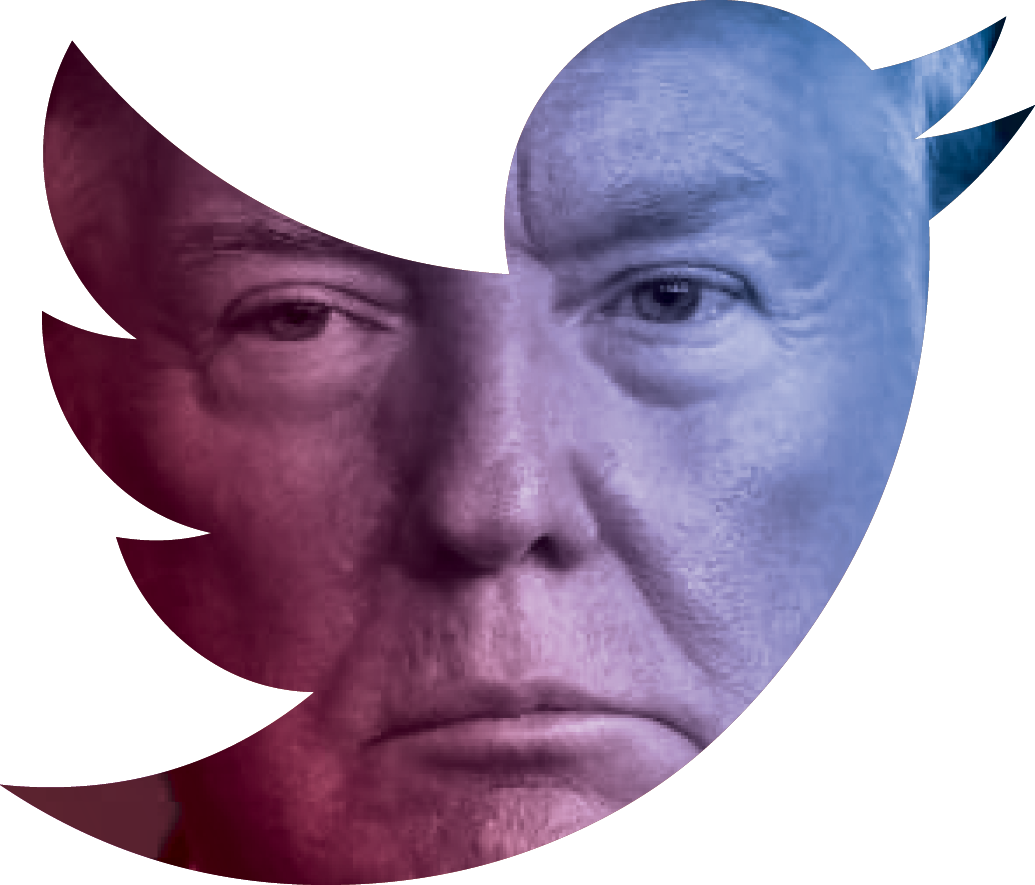 Trump vs. Twitter
No One is Holy in this War

Violence? Freedom of expression? The sanctity of truth? The reality behind President Trump’s war against social media is a lot simpler: in this war, both sides gain – and it’s the public that loses.

The relationship between US President Trump and the social media platform Twitter over the past two weeks can be summed up in one word: war.

Referring to the protest marches, Trump tweeted: "When the looting starts, the shooting starts." 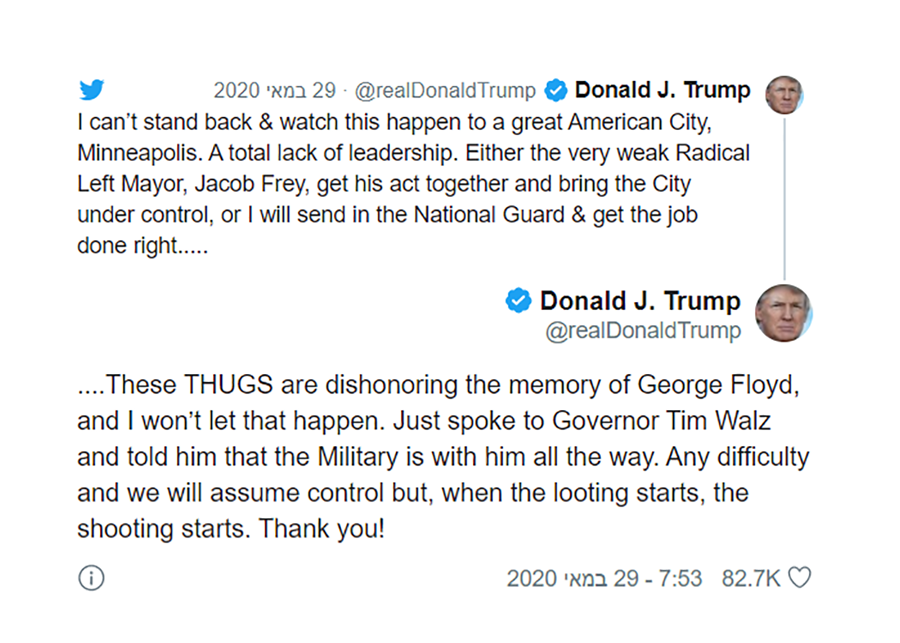 In reaction, Trump threatened to remove the legal protection of social media networks.

Twitter pulled a video of Trump’s because of a complaint about breach of copyright…Trump threatened once again. 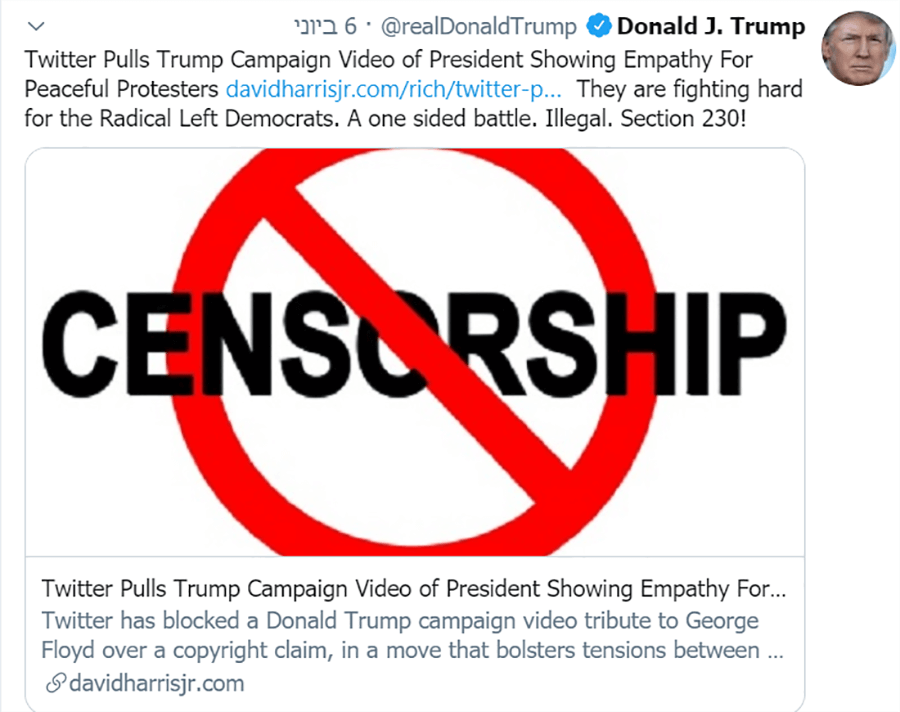 It can be assumed that we have not heard the last of this war.

This seems to be a conflict between two bitter enemies: on the one side, a powerful and fairly aggressive head of state, and on the other side, a social media network that aims to present the actual facts and to fight for the truth. However, the reality is far more complex. Let’s begin by posing the key question that must always be asked when trying to solve a mystery: who gains? The small graph shows the answer: both sides. 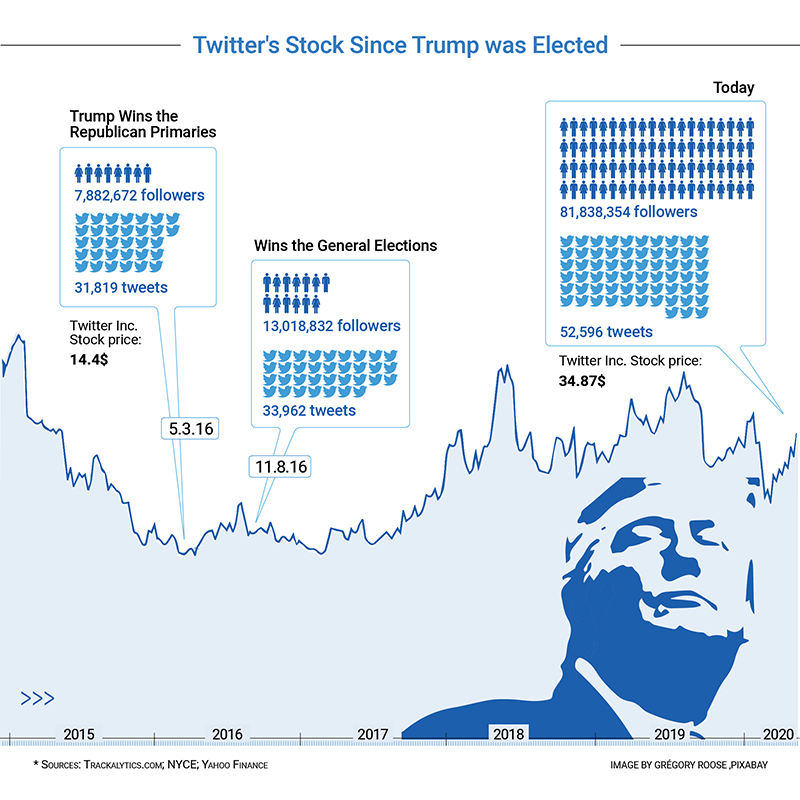 As can be seen here, as soon as Trump burst onto the US political scene (his serious breakthrough having already made several earlier attempts), not only did the number of his followers and the quantity of his tweets rocket sky־high, but Twitter’s stock price also shot up, even though it was in a downward trend at the time.

Anyone who knows anything about the world of stocks and shares will warn you against looking at stock price graphs over time, since all kinds of variables can affect the price. And although we support this fact, when we compared Twitter's stock to two other stocks, for example, the S&P 500 Index (which lists Twitter among its stocks): 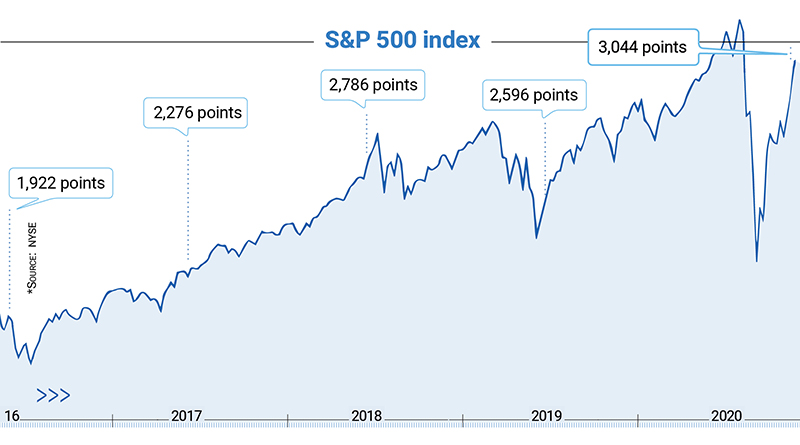 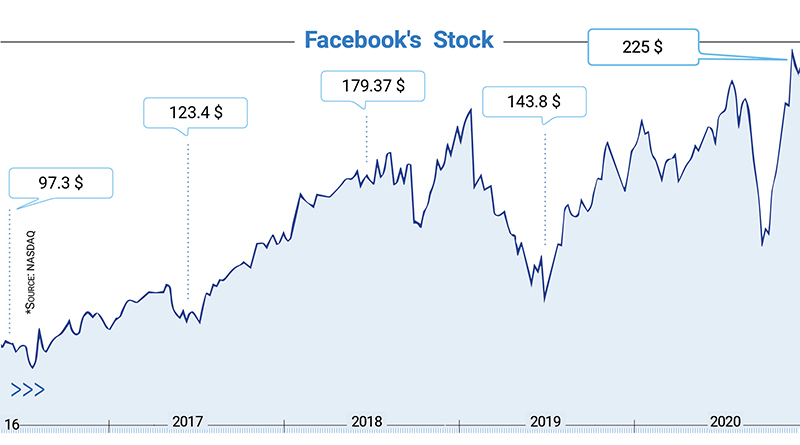 we see that their movements are far more restrained and far less volatile than Twitter’s. Both of their stock prices show moderate rises compared to the steep rises and falls of Twitter’s rollercoaster ride. It is anyhow difficult to compare these two stocks with Twitter as there are many other variables.

Although Twitter’s stock price did drop 2% in the days following Trump’s threats, it has since recovered and, as of today (June 8), it shows a 3% increase. The prestigious financial and investment news magazine Barron’s even claimed that the current storm could be very good news for Twitter’s stock price. 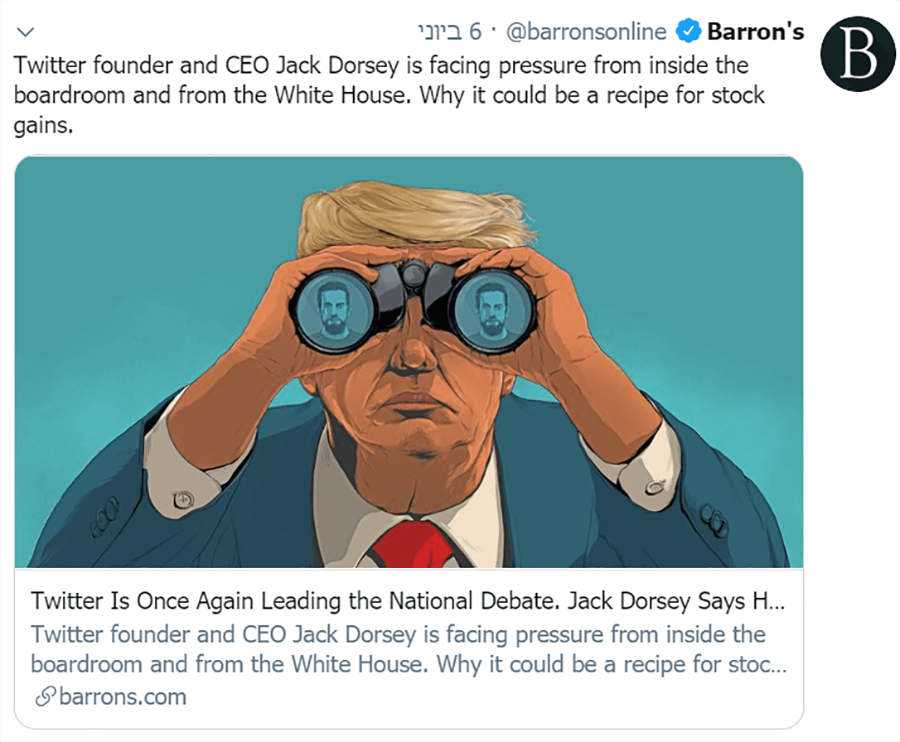 Too Little too Late?

This same symbiotic relationship between Trump and Twitter is also what turned social media into the wand that Trump uses to send the stock markets into a tizzy. The financial website Bloomberg even developed an interactive tool to demonstrate the impact of Trump’s tweets on the stock markets.

In other words, since Trump came to power, Twitter has not only benefited from the fact that the President prefers to tweet rather than hold press conferences, briefings, press releases, and interviews, but it has also risen to the status of a super־entity with influence over world economies.

A monster? According to an article in the US business magazine Fast Company, this question was asked at Twitter when Trump was elected. 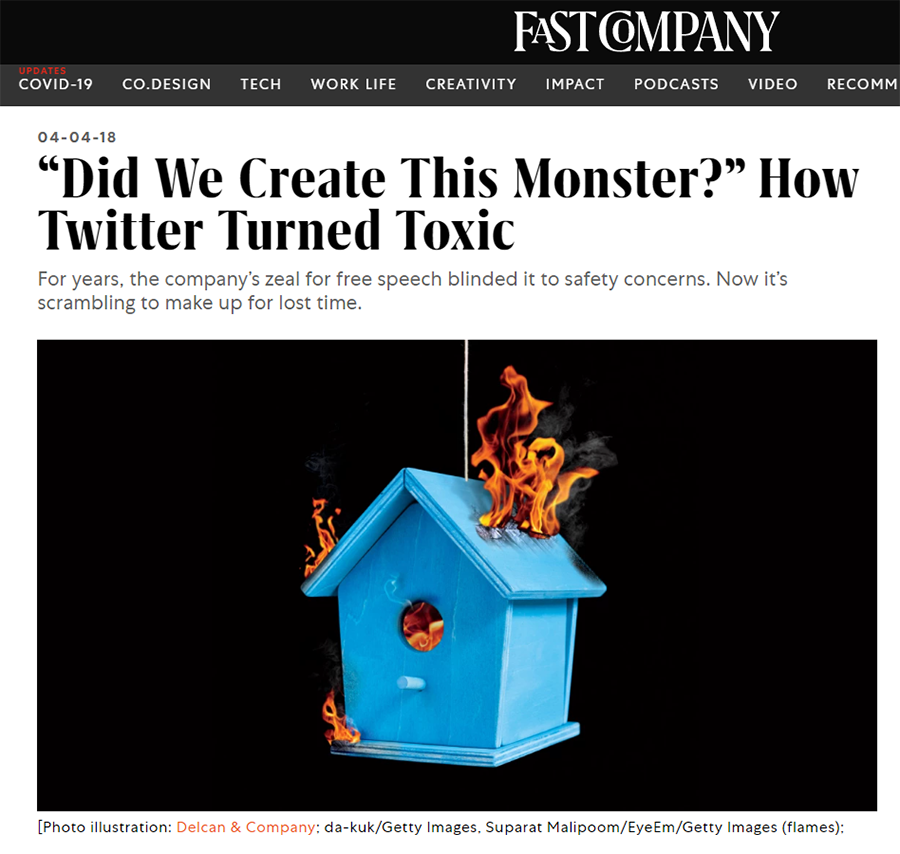 Following is an excerpt from the article:

On November 8, employees were shocked as the election returns poured in, and the morning after Trump’s victory, Twitter’s headquarters were a ghost town. Employees had finally begun to take stock of the role their platform had played not only in Trump’s rise but in the polarization and radicalization of discourse.

"We all had this ‘holy shit’ moment," says a product team leader at the time, adding that everyone was asking the same question: "Did we create this monster?"

This article offers an overview of the eight־year period from 2010–2018 during which, to put it mildly, Twitter was unsuccessful in its campaign against violence on the web, bots, fake news, and toxic discourse. Twitter was, it claims, often fairly negligent.

According to the article, Trump’s election was Twitter’s wake־up call, the moment when they realized that they need to be work harder against the spread toxic language. 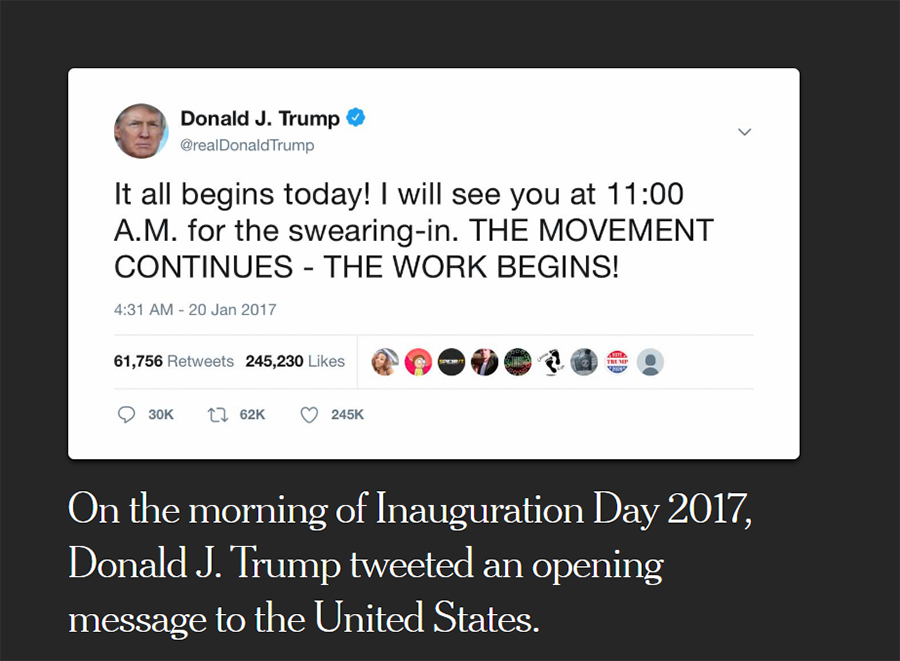 and in this interactive report titled "How Trump Reshaped the Presidency in Over 11,000 Tweets" showed what most of us already know about the way the President uses social media: attacks and, in particular, retweets of extremists. 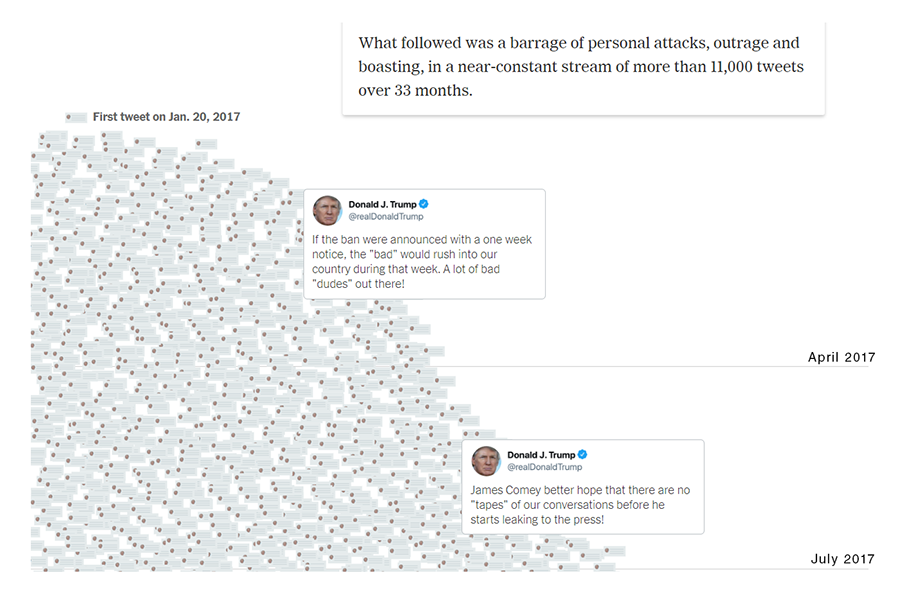 This article is, by the way, only available for digital subscribers. This is a good opportunity to recommend subscriptions to newspapers such as The New York Times despite the temptation to get free news from Twitter.

Although Trump and Twitter have become bitter enemies, the social network has actually flourished during the 45th president’s term in office. Not only has Twitter become Trump’s main way of communicating with the public, it has also influenced the stock markets, and indirectly, world economies.

Although Twitter is now being portrayed as a fighter for truth and against cyber violence, over the past decade it has not succeeded, despite its efforts, to eradicate harmful features such as fake news, bots, extremism, and toxic discourse.

This message should resonate whenever the public encounters a "war" between two parties. Whether they be political rivals, election candidates, or corporations, in such image battles both sides usually win and only the public – left with toxic discourse, disinformation, and growing extremism – lose.